October 15, 2021: New single Nocturne No. 1 from my upcoming album Works for Solo Piano. Here is a link to hear a high quality Apple Digital Master audio file of the pianist Michelle Schumann performing this composition.

September 22, 2021: New single Reflection No. 1 was released today. You can you can hear it on Spotify at:

Review of single by Steve Sheppard  and Kathy Parsons.

July 9, 2021: Many things have happened within the last few months. I’m in the process of doing a solo piano album and I’m recording with Michelle Schumann, a pianist known here in Austin, Texas. Profile link at: http://hr.umhb.edu/profile/Schumann/Michelle

We recorded on June 14, 2021, where Michelle performed four of my new solo piano compositions. This recording will go on my solo piano album. I plan to release some of the recordings as singles in the next few months. It was a fantastic experience! I was transfixed and mesmerize in hearing Michelle’s interpretations of my pieces!  We will do another recording session soon!

And on July 2, 2021, I participated in a Zoom session with Parma Recordings https://www.parmarecordings.com/

and with Anna Kislitsyna, the pianist, profile link at: https://www.kislitsyna.com/

where Anna performed one of my solo piano compositions Place in Landscape (Taormina) that will go on a solo piano compilation album that Parma Recordings is producing and will release this fall. This was recorded in Rockport, Massachusetts, at the Shalin Liu Performance Center. Below is a picture taken of the stage at the SLPC with a view of the Atlantic ocean taken on the day of the recording session.  I was told that they plan to book Carnegie Hall to have Anna perform the various compositions including my composition that was recorded on that day for a concert performance. I heard a mix of the recording and it sounded awesome! Anna did an incredible job interpreting the composition. 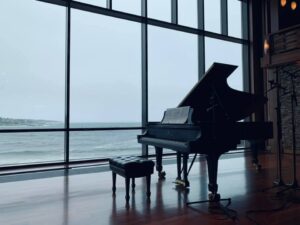 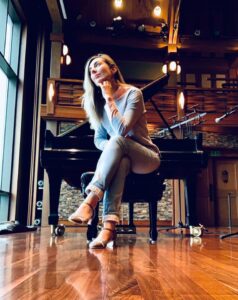 July 1, 2021: My new single Transition was released today.  To hear  on Spotify:

New reviews of my new single Transition from Steve Sheppard and Kathy Parsons.

December 19, 2020: Third entry of my latest release that was released today. This is my first arrangement of a Christmas carol, Lo,How a Rose E’er Blooming Again. I used the orchestra as a template to create the music. Also written out in Finale first, then exported the midi file into Digital Performer for more fine tuning the articulations. Here to stream on Spotify:

December 19, 2020: Second entry is my next release Haze on the Mountain. This piece was first written in Finale, the notation program, and then I exported the midi file onto my DAW, Digital Performer, for fine tuning the articulations of the instruments in the orchestra. I used Vienna Ensemble Pro Server to park all my sound libraries, which I used in both Finale and Digital Performer to create a mockup of what the performance would sound like. The pandemic stresses me out like everyone else, and I gravitated one towards expressing a relaxing inward journey as a musical expression. Using the orchestra as a template has always been my favorite approach in designing a soundscape in expressing a musical story.

Review of Haze on the Mountain by Kathy Parsons.

December 19, 2020: Adding a new entry here. First,  I released the single Paper Flags and the Wind, which is the music that I did for a music video years back. I remixed it in my DAW, Digital Performer, and some minor edits here and there. You can hear it on Spotify at:

August 7, 2020: Today my new single was released. Here is a link to hear it on Spotify:

Review of Embrace of the Infinite by Kathy Parsons.

July 4, 2020: A couple recent reviews of my new solo piano single Not Forgotten by Kathy Parsons, and Steve Sheppard. I’m also giving away the piano score of Not Forgotten.

April 6, 2020: Well, it’s a rough ride for everyone with this pandemic affecting all of us. I was in Galway, Ireland for the last several months this year. I was going to stay until the end of May, but then Covid-19 came about and disrupted all our plans. I headed back as fast as I could back home. I’m here now and safe. While in Galway, I did write some music. One of the pieces that I composed while in Galway is called Floating Lakes. It was officially released on April 3, 2020 on Apple Music, Spotify and other musical digital formats. A review of the composition was reviewed by Kathy Parsons, and you can read it at Kathy Parsons’ Review of Floating Lakes.

November 26, 2019: I just uploaded a new mix of my composition At the Center for mezzo soprano and orchestra. I did the editing and mixing in Digital Performer in Midi. I’ve used the Vienna Symphonic Library for the samples of the orchestra. It took a while to edit each measure for each instrument, but it well worth it. There’s 432 measures in this piece. The file that you can stream is a high quality file. It’s best to hear this with headphones. You can stream this file at At the Center for mezzo soprano and orchestra. Looking forward to my next projects that I’m working on.

September 21, 2018: Fall is here. I love this season. I tend to write more during this season. I’ve started several projects. One big project for voice and orchestra and the text is from a poem called Parallel Keys. It’s about animals and dreams from a series of poems by Helene Cardona. The composition is dreamy and surreal. Helene wrote it in English and translated into French. Also started a series of compositions for cello and piano. Piece No. 1 is in A flat Major and has an interesting time signature in 15/8 for the first two measures. I’m writing this for a cello player in Europe who will be on tour this fall in Europe and China. So far, what I’ve written is quite interesting. I did release my a music video this summer called  Journey Home, the soundtrack is available on Apple Music, iTunes, Spotify and other digitals music media streamers. Link for music video at Journey Home

June 17, 2018: I just got back from a trip to Europe. I went to the Netherland and went to Amsterdam, Deventer and Middelburg. All these places are related to promoting my current composition At the Center for mezzo soprano and orchestra. Below is a link to hear the mockup version of the conductor’s score. It was very moving to visit these places where Etty Hillesum lived. The text to the composition is an entry from Etty Hillesum’s diary, specifically entered on November 15, 1941, a prayer for guidance.
At the Center for mezzo soprano and orchestra

Here are a couple comments about my album Across the Water  posted at Amazon. Link below

5.0 out of 5 starsPoignant and ethereal – Quiet music for fast times
ByMusic Loveron June 17, 2015
Format: Audio CD
Poignant and ethereal, Across the Water is very contemplative and reflective, a peaceful space for collecting yourself and focusing your emotions and intention. The playing, arrangements and production qualities are all sublime. Quiet music for fast times. Slow down – relax – breathe.
and
5.0 out of 5 starsReview from NewAgeMusicWorld.Com / NewAgeMusic.nu
ByJohn P. Olsen / Review Publiciston November 10, 2010

While water is one natural element necessary to sustain life, music is one non essential we can certainly live without but then again, fluid and tranquil music can be a calming neutralizer to a more harmonious life, especially when one is caught in a hurricane of stormy life challenges.

Eric Chapelle is a composing pianist from Austin Texas whose original music scores conceivably calm the waters in several ways. Born in France, Eric is also an avid photographer who has lived in several countries around the world and his piano music retains the essential element for relaxing music by the calm buoyancy in sound that finds neutral ground with the pounding waves heard in some music today.

Across The Water is his Contemporary Instrumental 2010 release that impart 16 songs in ambient expression and creative imagination. Eric has performed his original compositions in concerts across the U.S. for over a decade, plus movie soundtracks in television, film, and commercials have been the scores that yielded wider recognition in addition to the 2 albums to his credit. Our Time was his 1998 album admired by many and had justifiably earned Eric a place alongside more esteemed pianists after his opening debut.

Eric Chapelle’s contributions in The Heart Aid Project has inspired me to tell you more about the story behind his dedicated efforts in a tribute CD in memorandum of the fateful World Trade Center events on 9 / 11. In addition to Eric who conceived and produced the project, he and review publicist Kathy Parsons had corresponded with 16 additional well respected pianists and everyone compiled the tribute CD without royalties. Simply put, their time and virtuous work on this 9 / 11 remembrance album is to be commended, in addition their efforts have also reaffirmed my current knowledge that the 17 contributors response is very much representative of the caliber of people who comprise the New Age genre today.

Across The Water is another fine illustration of the resourcefulness put into every composition. Julia Cory is a cellist from Texas joining Eric on songs Every Wish & Soft Landing then guitarist John Inmon & cellist Dawn Biega offer their contributing instrumentals on Across The Water ( Title Track ) Their level of performance and musical drama they offer expressively impart gentle movement into the picture and is well suited to the principal ideals this album represents.

This album retains yet one more harmonious notation since some of the 16 songs on Across The Water were recorded at the 150 acre Norton Island Retreat residency program created by the Easter Frontier Educational Foundation in Maine. Eric has characterized the island as an inspiring destination of solitude where writers and musicians like him can compose in peaceful moments of relaxing clarity.

Norton Island is one song where the natural environment of the retreat is evenly transferred then shown like a scenic picture of captured images. The comparatively timed piano solos, casual in ambient recollections like heard in Tide Pool wonderfully convey an impression of calm by the fluid detailing in chord phrasing and lighter melodies that offer subtle reflections using even handed moderation, much attune to Wild Iris in the mellow point of view it brings.

Remembrance is another beautiful song that carries a wonderful Cinematic overtone with every measure, and although the song on the surface is light the well placed notes engrave a deep feel of melancholy, in nicely placed emotional content I found quite moving. Contrasting soprano chorals evenly trace the piano melody while outlining lower octaves then model into more dramatic posturing and boldly crescendo as if gentle waves were moving across the shoreline.

While Across The Water from Eric Chapelle is not essential to daily living, his inspired by nature album is a solid collection of calming ambience that provides a wealth of relaxing harmony for the listener, smoothing out the rough edges of today while remaining anchored in a state of readiness for the next enduring wave of life challenges that are sure to arise.

My composition Hume’s Thoughts in Flight for baritone voice and music ensemble was performed on May 4, 2017 at Spencer Reichman’s Master’s Graduate Recital at Loyola University at Roussel Hall in New Orleans. I have made a short clip of the performance that’s about 3 minutes long of the beginning section of Part 5 This Constant Conjunction Here is the link to see the video.

Here is a link of a PDF file of all the words being sung in this composition. There are six divided parts.